Here is a brief summary of the 4th Action Conference in Munich.

In several working groups constructively and intensively possible strategies was developed and exchanged ideas and networking in order to prepare the resistance to the illegitimate meeting of the seven self-proclaimed leading economies in the Bavarian Elmau.

There the route of mass demonstration in Garmisch-Partenkirchen were discussed and presented on 6 June. Planned and is currently logged on a route from the center of Garmisch to the eastern outskirts of the village on the B2. Start 14.30 at the station forecourt. The speeches should ever be about 5-7 minutes short, be kept for several speaker and cover the broad spectrum of the Alliance.

In addition, there will be a protest march ever to 8:00 to Elmau on following different routes on June 7:
Per bicycle and motorcade of Garmisch-Partenkirchen on the B2 to Klais and continue as Route Number 4.  Meet at the station square in Garmisch Partenkirchen

The aim is to block the two days 6 and 7 June as effectively as possible the summit or its infrastructure. The blockades are designed for a wide audience. People who wish to participate in the blockades should be previously informed about the possible blockade strategies and ideally participate in Blocadetrainings – if not already done (Watch out for announcements!). In addition, everyone has to be expected that the blockade can last for 24 hours and should. Accordingly, remember to carry sleeping bags, food and medicines for this time. The locations of the blockages are, of course, understandably not yet published in this space.

Meanwhile, could be leased from a private owner in the area of ​​a meadow for the duration of the protests. The estimated ranges for 1000 Campierende. That’s enough for a long time not for all arriving activists. Now it is important not to be found in the next 6 weeks, further surfaces. The Tourist Board Garmisch incidentally announced that currently 30% of the accommodation facilities are not yet fully booked. :-)

The action consensus was reaffirmed.
On Sunday there was a press conference 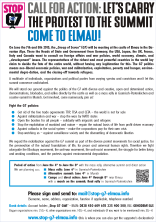